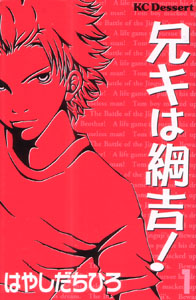 I picked both volumes of this 2-volume series together because they, were, ahem, on sale 🙂 I admit, I can never resist cheap manga! I wasn’t sure what kind of series this would be. I actually had the impression that this would be some sort of school gang or yakuza type of thing, considering the scary-looking guy on the cover of volume 1. The girl on the cover of volume 2 doesn’t look any less intimidating 🙂 However, this turned out to be a romantic comedy. Well, there are hints of past school gangster stuff, but that isn’t the focus here. Anyway, this is the first series I have purchased by this author. The art style is interesting. It is very simple and does not use that many screen tones. It is mostly very basic line work, not your typical shoujo style. It isn’t UGLY, exactly, but it isn’t all sparkly big eyes and pretty characters. In fact, the art style gradually changes a bit during the course of the series. It actually becomes a little less detailed as it goes on, and there is more use of solid black for little shadows instead of tone. Reading this book was a bit of a challenge, as the characters don’t speak standard Japanese. I think they are all using the Osaka-ben dialect, but I am not sure. At any rate, they all speak funny ^_^ While I wouldn’t exactly call this series smutty, there are some adult situations, and moments of brief nudity. Also, if you can’t handle the possibility of step-sibling romance, you may want to stay away from this one!

Misao is a 15 year-old high school student who lives with her grandmother and her older brother Tsunayoshi. Tsunayoshi, 26, is actually Misao’s stepbrother. His dad had married Misao’s mom back when Misao was just five. Unfortunately, their parents later died in a car accident, and now it is just the three of them. Grandmother is related to Misao through her mother, but Misao and Tsunayoshi are not blood-related. Misao and Tsunayoshi get along pretty much how you would expect of siblings: they bicker and fight, but in the end, their family bond keeps them together.

Tsunayoshi works as a teacher at a prep school, and is very popular with female students and adult women. He is energetic, confident, and often rather arrogant. He likes to flirt with all the ladies even though he already has a beautiful girlfriend, Ayako. Misao is not quite as impressed with her brother as all the other girls are, and she can’t quite understand why they are always drooling over him. This is probably because she sees the side of Tsunayoshi that they rarely do. At home, Tsunayoshi is a lazy slob. He drinks and farts and is rude. Yes, this is a lovely image!

As for Tsunayoshi, he cares a lot about Misao, and is very overprotective. One of the main reasons they always fight is because he has decided that Misao is not allowed to have a boyfriend. This idea disturbs him and makes him unhappy. No guys should ever get near his Misao! He feels very responsible for her. He became her brother when she was so young, and she always clung to him, calling “big brother, big brother!” When their parents died, it was up to him to take care of her. He can’t get used to the idea that the cute smiling child from his memories might be growing up.

Misao and Tsunayoshi clash over various things. He is angry that she had made friends with a shady boy at her school. She is upset that he is so overprotective. They have a lot of misunderstandings. But there is really more starting to develop between them. Tsunayoshi actually changed a lot in order to take responsibility for raiding Misao. As a teen, he was actually quite a delinquent badass. He got in fights frequently, and he still has ties to a number of local gangs. When their parents died, he put that life behind him in order to devote himself to Misao. Tsunayoshi’s girlfriend, Ayako, has noticed his focus on Misao, and begins to even feel jealous.

This series starts off at a leisurely pace, setting up the family situation, the relationship between Misao and Tsunayoshi, and giving hints that things may be changing. Misao and Tsunayoshi are the main characters, but the series doesn’t only revolve around their relationship. There is also time spent on various people that they meet and other people they know. But the situation between Misao and Tsunayoshi is always there in the background, and slowly begins to dominate the story. Misao is trying to convince Tsunayoshi that she is growing up and should be able to have a boyfriend. Yet at the same time, she is also starting to see Tsunayoshi not just as her brother, but also as a man. This confuses her, and she tries to ignore it. But the feeling grows. Tsunayoshi tries to resist the idea that Misao is becoming an adult and may not rely on him like she always used to do in the past.

Misao and Tsunayoshi are brother and sister, nothing can ever develop between them, right? Sure, they aren’t related by blood, but Misao grew up with him as her brother, there is no way he would ever see her as a woman, and he will always just be her annoying big brother, right? As the series progresses, things start to get a bit more serious, and tension begins to build between them. Is a deeper relationship possible, or will they stick to their family bond?