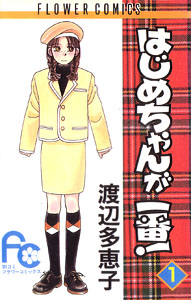 I picked up a few volumes of this series at the closing sale of a manga cafe. I wish I had picked up the whole series, because now I am stuck wanting to read more, and I can’t find more of the books. I am going to have to order it online from somewhere! This is a fun little series with really cute artwork that actually doesn’t look too dated, in my opinion. While there is a bit of ‘wacky screen-tone abuse’ that goes on on late 80’s/early 90’s manga, and the characters aren’t emaciated (as is the shoujo manga fashion these days), it still manages to all look clean and attractive. Yes, I know, another older manga series. But what can I say, there is a lot of great stuff out there! I also like to talk about series that are not as well-known, and with the rate that all the new series are distributed on the internet (boo) it is a bit more difficult to find obscure stuff. So, into the past I go! 🙂 Anyway, each cover of this series is similar, with the red plaid and Hajime-chan standing there, but each volume features her in a different outfit. It’s quite the cosplay fashion show!

Hajime-chan may look like your average 17 year-old 2nd-year high school student, however, she is a girl who has been suffering a crazy home life for years and years, with no end in sight. You see, Hajime has 5 younger brothers. And they aren’t 5 regular younger brothers of various ages. They are QUINTUPLETS! When Hajime-chan was 2 years old, her mom made the local news after an amazing successful multiple birth. Unfortunately, there is no way her parents can do everything themselves, so all her life, Hajime-chan has been forced to help raise her siblings. It is like she has become an old lady already, always worrying about household chores and buying things on sale and making ends meet. Everyone knows her as the older sister of all those boys.

Atsuki, Kazuya, Satoshi, Takumi, and Naoto are all very cute. But living (in the same room, no less!) with them is sort of like living with a pack of wild dogs. They are all very rowdy and outgoing and snoop into Hajime-chan’s business. She has no privacy! They like to read her diary out loud and make fun of her. But still, Hajime-chan loves them very much, and is quick to defend them if anyone says anything bad about them. At times they can be more like a pile of cute puppies when they all fall asleep on the floor together. So adorable!

As if living with these 5 brothers wasn’t crazy enough, things get even more crazy! Because her family has so many children in it, they are very poor, and struggle to make ends meet and feed everyone. Hajime is always trying to find ways to make money. One part time job she found was for her brothers. They appeared on local TV commercial for a drink. The commercial is funny, as the boys start off serious, and then crack up and end up laughing and romping on camera. All of Hajime’s friends at school saw the commercial, and they think it’s great. In fact, it is funny enough that it catches the attention of the president of a real talent agency! He saw the ad too, and wants to scout Hajime’s brothers and set them up as a boy band!

Hajime is somewhat reluctant at first, but her family really needs the money, and this seems like a great opportunity. And the boys want to do it, so she agrees. Soon enough, Hajime is stuck herding her brothers to and from the studio, where they begin intense training sessions, learning how to dance and sing. They will soon be making their debut as a group under the name A.A.O.

A.A.O. isn’t the only group that this agency represents. They actually manage one of the most popular boy groups ever, “WE.” WE is a duo consisting of 19 year-old ETOU Akira and 19 year-old WADA Mizuki. They are insanely popular, though of course Hajime has no idea who they are, as she is always so busy wrangling her brothers. But once she starts working in the same agency, she gets to know them very fast! Mizuki, the one with dark hair, is very sarcastic, and doesn’t seem to like Hajime or her brothers very much. Akira, with the light hair, seems more easy going, but he does prefer to follow Mizuki’s lead, so if he decides to hate A.A.O., Akira will follow along. Hajime has a huge crush on Mizuki (He’s SO COOL!), and blushes profusely whenever he is in the room. However, he does not appear to return her feelings.

This series (at least the volumes I have so far) follows Hajime as she struggles to support her brothers in their career as a boy band. The boys are actually very talented and work very hard. The guys of WE are a constant thorn in Hajime’s side, always being so negative about her and her brothers. They look down on the younger boys, and at one point even consider leaving the talent agency because of them! It’s up to Hajime to somehow keep the peace and juggle everything. Go, go Hajime! If anyone can do it, she can!