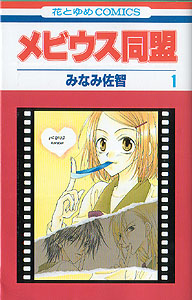 Uh, why did I buy this tankoubon? Er, I am not sure, really. Probably the cute cover, but I really can’t remember. Hey, the cover IS cute! I don’t think I have anything else from this author. I will have to see what else she has done, because I really enjoyed this story. This is volume 1, and I hope that it runs for several more volumes, but with my luck it will end in volume 2. So many series I like these days are ending after 2 or 3 volumes. The art style in this is a little odd at times, but I like the facial expressions the characters get when reacting to strange or surprising things. So amusing ^^

In this story we get two idol singers for the price of one! Well, sort of. The heroine of this story is named Matsuri TAKANOSE, and she is a first year high school student. Her mother is the board chairman of the school, and Matsuri is under a LOT of pressure to be the perfect student. Her mother is very strict, and Matsuri’s relationship with her is not very close. In fact, I would say it’s rather icy. Because her mother is the chairman, Matsuri is treated differently by her classmates, and she doesn’t have any friends. One day after a grueling meeting in her mother’s office at school, Matsuri encounters two boys who treat her differently. One is Takemasa ANDOU-kun, a smart, quiet guy who is known for keeping to himself and not talking much. The other is Watanuki-kun. Kaguya WATANUKI is a very cute, outgoing, athletic guy. He and Andou-kun are classmates, but they don’t appear to be friends.

Matsuri is a big fan of the hot idol singer guy MUTSUKI, and collects as much MUTSUKI stuff as she can. Because her mother is so strick, she must hide her obsession with the singer. She must also hide her favorite hobby, photography. She LOVES taking photos, and worked a part time job in secret in order to buy herself a camera. Whenever she can, she sneaks out to take photos. One day when in a park snapping photos of kids playing, she overhears a strange conversation. What surprises her is that she recognizes the voices. It’s Andou-kun and Watanuki-kun! They are together in the park, chatting. This strikes Matsuri as strange, because at school they act like complete strangers and ignore each other. Even more shocking is their conversation! Andou-kun and Watanuki talk about Watanuki’s bad singing. Watanuki pulls off the hat he is wearing to reveal hair a different color than what he normally his. With this hair color he looks… no, he IS the famous idol singer MUTSUKI! Matsuri is stunned. She had no idea that Watanuki-kun was MUTSUKI! Even more amazing is that Watanuki really CAN’T sing! HE sits with Andou-kun and tries to sing, and his voice is awful. Then Andou-kun starts to sing, and it’s MUTSUKI’s voice! MUTSUKI is not a real person, he is really a combination of Watanuki and Andou. Watanuki provides the sexy outgoing image, while Andou provides the fabulous voice. Matsuri can’t believe this, and immediately snaps a photo of the two boys together. Unfortunately they see the flash from her camera and give chase. Matsuri runs, but they eventually catch her, and they realize that their secret is out. This sets up an interesting love triangle, as Matsuri is the only fan to know the truth about the famous idol. Much fun!