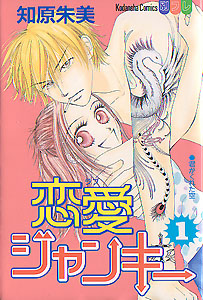 The eye-chatching cover is what attracted me to this series. I really liked the contrast of the characters. The girl is cute, and looks very fashionable and fun. Meanwhile, the boy looks tough, and is pictured having yakuza-type gangster tattoos. Now there is a case of opposites attracting! I like those types of stories. This manga has a cute style. It is a little bit too ‘scratchy’ to be my favorite art style, but it is still very cute. I really liked the hero in this. He knows what he likes, and is not afraid to express himself.

The first time high school girl Sonoko sees Narusawa-kun, it is after school one day. Sonoko had forgotten something in her classroom so she went back to get it. She glances out the classroom window and sees a boy in the schoolyard below. He is surrounded by the unconscious and bleeding bodies of some other boys. Narusawa stood there, with blood running down his cheek, and a dangerous look in his eye. He is a gang-member, and had just beat up the guys all around him. He senses Sonoko’s eyes on him, looks up, and catches her eye. That was the beginning. Sonoko goes to a school that is co-ed, but the girls only have classes with girls, and guys with guys. Unfortunately, at this school, most of the guys are the loud, rude, dangerous, violent gang-member type, and most fo the girls know to stay far away from them. Sonoko hates this type of boy and never wants to be near one! But things are about to change when one such boy asks her to be his girlfriend! It’s the dangerous Narusawa-kun himself! He waits for Sonoko after school and follows her around. He seems to really like her! How shocking! Narusawa is one of the toughest guys in the school, and Sonoko is stunned. What should she do! She actually fears Narusawa because he has such a scary reputation. Actually, Sonoko is not that thrilled with any of the guys at her school because they are all so dangerous and crude. But Narusawa has a different side to him that he is willing to share with Sonoko. He can be kind and funny. What a strange couple they would make! There are a lot of obstacles in their path to love. Narusawa is willing to tackle them, but can Sonoko face her own fears?