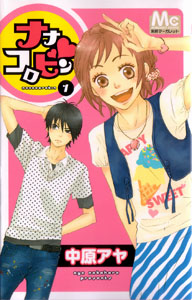 Such a cute cover! What made me pick this up is not that fact that this is by NAKAHARA Aya, the author of the very good and very popular “LoveCom”. I admit it. I bought it for the surly boy on the cover 🙂 Look at him! He looks absolutely grumpy! I love that type of character, especially when they are paired up with such an obviously cheerful character like the heroine. I feel a bit bad about never managing to talk about LoveCom on this site, so I will make up for it by covering this new series! This is marked as volume 1, so there is more to come.

What a great start for a series! My attention was hooked from the first page, where our heroine, Nako, barges in on a wedding in progress and shouts at the groom to RUN! When he sees Nako, he shouts her name, grabs her hand, and they run from the church! Wow, what a bold heroine, stealing a guy from the altar!

But, er, unfortunately, it’s not HER guy.They run out of the church, nearly running down the groom’s younger brother in the process, and Nako delivers the groom to her thankful sister. Poor, boyfriend-less Nako does it again. She actually liked the groom a lot, but he picked her older sister instead of her. How noble of her to do her sister such a big favor! Nako’s family (who run a local restaurant) try to cheer her up, and Nako tells herself that if she is lively and cheerful, she can do anything, but it is getting difficult to believe it.

Nako remembers the brother that she almost run over while running out of the church, and idly wonders if he is okay. Her thoughts are answered the next day at school when she discovers the brother (named Konatsu) is a student at her new school! It’s the first day of her freshman year of high school, and Nako hopes things will get better. Seeing Konatsu is the beginning of a very lively school year.

Konatsu is not the friendliest guy. He is mad at Nako for stealing his brother away. His family runs a very large and powerful corporation. They are wealthy. He can’t stand the idea of his brother running off with some disgusting poor girl. Oh boy. The insulting way he says this hits a nerve with Nako, and before Konatsu know what is happening, Nako punches him hard! How dare he insult her sister and her family like that! She will not stand for his rough, rude behavior!

This is great in theory, but, as things always seem to go in shoujo manga land, Konatsu and Nako end up in the same class. The other girls in her class whisper rumors of Konatsu’s reckless and wild behavior back in middle school. He was always in fights and doing troublesome things, but because of his high ranking family, he got away with it. This does NOT impress Nako, and she is quick to beat him up when he tries to insult her again. The pair are always arguing.

Unfortunately, Nako’s action (stealing away Konatsu’s brother) has some unexpected consequences, and even though she and Konatsu do not get along, they find out that they may end up much closer than they ever thought they would be!

Such a fun series so far! I love how surly and stubborn Konatsu is, and how funny he gets when he is flustered or embarrassed. Nako is great also- very strong and absolutely un-flustered and unapologetic about things, and not afraid of Konatsu’s surliness. I can’t wait for volume 2!