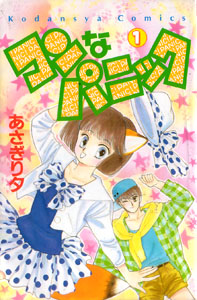 Oh, wow, I can’t believe I haven’t included this series on this site yet! I came across this volume again while doing some manga-organizing, and I almost passed over it, thinking that it must surely already be here. But amazingly, it wasn’t! I must correct this horrible omission right now! This is a cute little fantasy series, and is actually one of the very first manga I ever saw. A friend of mine owned this, and I remember looking through it and really enjoying it. This is before I even started collecting manga myself. The series always lingered at the back of my mind as one I wanted to own too. When I later came across the series at a bookstore, I had to pick it up! I still don’t own the whole series though 🙁

KISARAGI Mai is your average 2nd year middle school student. She is cute, a bit short, and has a huge crush on Takumi-kun, the star of her school’s basketball team. Mai sees him all the time, as she works as a manager/helper for the basketball team. She likes him so much, but has yet to gather the courage to tell him so. She is so shy! This fact frustrates her, and she finally engages in a bit of scarf-knitting-as-a-declaration-of-love. But even that doesn’t work out well for her. How will she ever express her feelings to Takumi-kun?

Obviously, considering Mai is featured on the cover of a shoujo manga, her normal, everyday life is about to change. It all begins when she wakes up one morning to discover she has ears! Well, of course she has EARS, but I mean, she now has animal ears! Furthermore, she now has a tail! A large fluffy tail! Naturally, this freaks Mai out quite a bit. Where did they come from?! But when she rushes downstairs to show her mother, the ears and tail are gone!

This has Mai very distracted at school later that day. When a classmate on the girls basketball team says some not-nice things about Takumi, Mai reacts before she can think, steals the basketball away, and makes a slam dunk! Everyone is amazed, Mai included. How did she do that?! Mai runs away, and leaps with a single bound into a nearby tree. Her ears and tail are back, oh no! And to her surprise, the tree is already occupied!

It is here that she meets Ran, a handsome guy who informs Mai that she is a kitsune, a descendant of a legendary creature. If she wills it, she can make herself appear human. Ran himself is a kitsune also, in fact, he is a pure-blood, kitsune, from a superior lineage than Mai (yeah, Ran is a bit haughty about this). Ran leaves Mai after telling her about what she is, and Mai can only sit there, stunned and amazed.

Meanwhile, her slam dunk has caught the interest of none other than Takumi-kun! He is super excited about it, and wants to know how she did it. Can she teach him? Oh boy, talk about awkward. Poor Mai. Her crazy days are about to begin, as she must learn to hide her kitsune-ness from people (her tail has an embarrassing habit of popping out at all the wrong times) while still longing for a normal life. The very arrogant kitsune Ran is also still hanging around, offering his (usually unwanted) opinion about things. Mai has some fun teasing him and making him lose his “cool” appearance. However, he can be very helpful, teaching her about being a kitsune.

This is such a cute series. The artwork is very early 90’s-ish, which to me means that is is slightly wispy and a bit sloppy, but not quite as crowded/busy as something from the 80’s would be. The plot reminds me a bit of the cheesy 80’s film Teen Wolf. But Mai looks a LOT cuter than a werewolf when she manages to fully transform into her completely kitsune form… 😀

I need to find the rest of this series soon 🙂