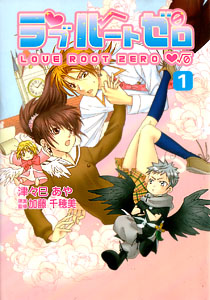 Now here is a book that is a little bit different from what I usually cover here. I am actually not sure if this is officially shoujo. Well, ok, I am sure it’s aimed at girls, but I don’t know if this was published in a manga magazine or not, like the other stuff I read. I don’t own anything else by this publisher. I found this book at a used bookstore, and loved the cute cover. It looked like a fun adventure. I poked around a bit and discovered that a PS2 game based on this story is coming out in 2009, but I don’t think the comic is based on the game. Anyway, this is a cute fantasy romance story with simple but pretty artwork. There is a mystery in it as well. I admit, I think the guys in this are hot. ^_^ The heroine in this is cute, too. She seems fairly sensible and is not spineless. There seem to be three volumes total for this series. I need to get my hands on the two I am missing. I really want to find out what happens!

This story begins in with a typical shoujo manga situation — a love confession. In this case, a cute girl named Yaeko is being confessed to by a really cute guy named Kazuya. However, instead of accepting the confession, Yaeko thanks Kazuya, but she can’t return his feelings. Kazuya looks disappointed but understanding. Yaeko has a boyfriend, you see, and she really loves him. Kazuya knew this, but he confessed anyway. Poor guy. Kazuya is a popular guy, with a lot of friends. He is not the school prince time. He has a more laid-back, casual style. He is outgoing and honest.

However, before they can get much farther than this, the ground suddenly starts shaking. An Earthquake? Kazuya dives in front of Yaeko and protects her from a falling bookcase. While they are still holding on to each other, there is another shifting, but it is not just the ground. The air seems to shift, and suddenly Kazuya and Yaeko find themselves in another place. Another dimension? They are in an empty area. There is a building, and pretty landscaped grounds. They are alone. At least, that is what they think…

Obviously, Yaeko and Kazuya are freaked out about what has happened. Kazuya does his best to act all protective of Yaeko. He is really cute 🙂 But strange things begin to happen in this dimension. Things or problems from their pasts manifest and confront them. Yaeko misses her boyfriend. Sinister forces also attack them. This dimension is NOT fun. During their adventures, Yaeko and Kazua become closer and have to rely on each other. They soon encounter other people there, some of them surprisingly familiar. But where are they, and what is going on?

Meanwhile, Yaeko’s boyfriend Kouichi is getting worried. Really worried. Yaeko has disappeared, and so has Kazuya. Are they together? Where did they go? Rumors are beginning to spread around their school. Yaeko and Kouichi are childhood friends, and last year Kouichi saved Yaeko from being hit by a car. His injuries ruined his chances for his Fencing championships. Yaeko vowed to be Kouichi’s girlfriend, and she does love him very much. Kouichi has a studious look. He has short black hair and glasses. He is very confident, in a serious sort of way. His personality is almost the opposite of Kazuya’s. Kouichi has feelings for Yaeko too, and is very worried about her, yet there is something about his affection for her… it is almost obsessive… she means everything to him…

I am really enjoying this series. I need to look for other series by this artist and writer. I also need to learn more about this publisher and what other series they have released.