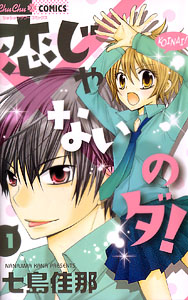 Looking at all the series I have talked about on this site so far, I don’t think I have covered too many titles from the ChuChu Comics imprint of Flower/Shogakukan comics. I am not sure why, really, as they usually are very cute stories. In general, they seem to be aimed at a younger audience, something along the lines of Ribon or Nakayoshi titles maybe. In this case, I didn’t buy the book because of the front cover (Shocking!) instead, I bought it because of the back cover. On the back, we have a picture of the supporting characters in the series. In particular, we have the heroine’s best friend. She likes to read manga, so she is shown reading a shoujo manga that looks wonderfully 70’s shoujo-manga in style. That alone prompted me to get this 🙂 And sure enough, we do have a lot of references/humor that relates to this 70’s shoujo manga series within this book, so I am very happy ^_^ I like the clean, attractive art in this book, and look forward to getting the next volume when it comes out.

This is the story of a first year high school girl named SAOTOME Nanno. She seems to be a fairly average girl who has two close friends – a girl named Maki who has long dark hair and glasses, and a cute, likable, boy named Yuusuke. Nanno-chan does not have a boyfriend, but she dreams of having one. However, she has some past trauma that makes her wary of boys in general (Yuusuke excluded) and she just doesn’t know if she will manage to find a guy she likes.

You see, a few years ago, back in 6th grade, Nanno really liked a boy in her class. His name was Tsuzuki-kun, and he was Nanno’s good friend. At that time, Nanno had short hair, and was known to be a tomboy. Tsuzuki had the same taste in shounen manga that Nanno did, and they were great buddies. However, Nanno eventually fell for him, and one day, she left a love letter for him in his desk. Unfortunately, Tsuzuki was not alone when he discovered the letter. Before he could read it, his friends grabbed it, and they all read it out loud. This horrified poor Nanno, who was watching all of this from a hidden doorway. The boys all laughed, making fun of Nanno’s tomboy looks, and Tsuzuki even tore up the letter, saying it was troublesome. How awful!

Nanno was crushed, and she still has nightmares about the event to this day. But now she is in high school, and she is thinking maybe she could find a boy to like again. Well, ask and ye shall receive… Nanno soon encounters a boy who makes her heart pound. He is a class representative like Nanno, and he is tall and handsome. He looks surprised to see Nanno, and soon he starts acting a bit mischievously, teasing Nanno. He even asks her if she has fallen in love with him! The way he says this strikes Nanno as strangely familiar.

She soon realizes that his line about falling in love with him is exactly the same as a scenario from this hilarious 70’s-style shoujo manga that her friend Maki reads. The princely hero in that manga asks the heroine the same thing, and Nanno compares her reaction to what happens in the manga. When she meets this handsome guy again, he once again mimics a line from the manga, and Nanno can’t help but laugh. He has read that manga too! (Actually, yes, he has… and it’s pretty funny to watch him read it 🙂

But guess what. The fact that he is spouting the manga dialog is not why he seems so familiar to Nanno. It turns out that this guy is none other than Tsuzuki-kun! They didn’t go to the same middle school, so it has been a while since she has seen him, so Nanno totally did not recognize him. Ah, but he recognized her right away, and has been deliberately poking fun at her while she reacted in silly ways to his antics. Nanno is furious and humiliated when she realizes who he is. How could he be so mean to her yet again! After he broke her heart before! She can never forgive him! Even worse, he is doing all this while he has a girlfriend! She is cute and sneaky, and very possessive of Tsuzuki, and doesn’t want Nanno to be anywhere near him. As if Nanno would WANT to be near that jerk!

Just because he makes her heart pound still… that doesn’t mean she likes him. It’s anger, that’s all. But wait, there is someone else who likes Nanno too!

While the plot of this manga reminds me of the Ginta plot in Marmalade Boy, I still really enjoyed this book. Aside from the awesome 70’s shoujo manga stuff, I also really liked the glimpses we get into Tsuzuki’s thoughts. They are extremely cute. He can act like an ass, but I like him anyway ^_^ There is a scene at a bowling alley that really had me go “awwwwwww!”. This is the first volume of a series, and I hope it manages to continue for more than 2 volumes, because the characters are fun. I would like to see more stuff with Nanno’s friend Maki, because she is awesome too.