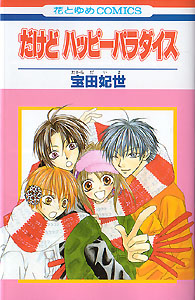 This was purchased at random because of the very cute cover. I mean hey, one girl sharing a scarf with three cute guys?? Heh, I had to see if it was some sort of weird love triangle/square plot. I hoped that they weren’t her brothers or something, hahah ^_^ Turns out this story does use a common shoujo manga plot device, but I fall for that plot device every time, so I don’t mind reading many stories that use it. There seems to be only one volume of this, but I think there could be (should be!) more of it. The story is nice, and the artwork is very cute! The line work is clean and attractive.

Our heroine, Ruu MACHIDA, is having a hard time. Her mother died when she was little, and her father, with whom she had been living, has disappeared without a trace after getting into debt. Ruu is on her own. To make ends meet, she takes a job as a live-in maid for a very wealthy household. (Nothing like getting a job by going to a large house and just asking at the front door for one!) To Ruu’s surprise, the house she ends up working at is the home of three cute brothers, and she already knows one of them! They are: HIURA Yuzuki, the youngest and very pretty one. He is often mistaken as a girl, and it really pisses him off. Then there is HIURA Sanai, a very cute and outgoing guy who likes Ruu on the spot and is happy that she will be their maid. Sanai commutes to an elite school that is kind of far away because he is rather smart. Finally there is the oldest brother, HIURA Shuuichi. Shuuichi goes to the same school as Ruu, and she recognizes him right away because he is very popular with all the girls. They agree to let Ruu work their because they are often alone and they could use the help. Their parents are often away on business. Ruu moves in and works hard as a maid, and they all become very close. But things aren’t always smooth sailing. Ruu has a lot of pressure on her because of her father’s debts, and three very cute guys to deal with!