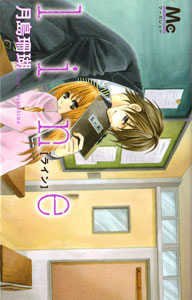 After a bit of a break, I’m back! With more teacher-student manga, even! Hurray! I picked this one up entirely based on the cover, which makes it fairly obvious that there is some teacher-student fun going on here. That class attendance book is a dead giveaway. This book is by TSUKISHIMA Sango, an author I’m really starting to like. She hits all my fangirly shoujo manga spots with her light, cute (and of course, totally unrealistic) stories. A while back, I really enjoyed another title by her, Tsuugaku Densha. This one is just as fun. It’s also a one-shot volume. The cover story takes up the first half, and another equally charming, story takes up the second half. The author’s artwork is clean, and somewhat typical (nothing exceptionally original, style-wise), but it’s cute, and all of her characters have really funny expressions.

Our main story, “line,” begins with a love confession between teacher and student. Wow, no wasting time here! But what makes this slightly surprising, is that it’s the teacher confessing to the student! And, to make it more fun, the confession comes totally out of the blue, surprising the girl. Heck, it surprises the teacher too, who had no intention of confessing, but instead just sort of blurted it out while handing her a pile of notes for class. He looks horrified after his confession, and his expression is priceless. “Eh? No way! I said it! Really, what am I doing?!!” He is totally freaking out. The girl just sort of stares at him blankly when he says he just couldn’t hold back any longer. The teacher is Kouno, and the girl is Honami.

Well, if that isn’t a fun way to start a story! It turns out that the Kouno’s love isn’t really totally out of the blue. He didn’t actually fall for her while she was his student. Kouno and Honami are actually childhood friends. Kouno is best friends with Honami’s older brother, so they have known each other for a while. He is a regular sight at her house. But still, he is several years older than Honami, and is a 3rd year college student now employed as a teacher at her school. Regardless of when he fell for her, their current situation is a bit awkward. Kouno doesn’t expect any sort of reply from her (not that he expected to confess), but Honami knows she could never reply how she truly feels anyway.

Honami is a smart girl. She actually loves Kouno-sensei back, but she is realistic enough to know that if she were to confess right back to him, she would only be jeopardizing his dream of becoming a teacher. Honami has known Kouno for years, and watched him study hard to reach his goal. She couldn’t do anything that would ruin his chances of success. A teacher getting caught dating a student would be a disaster. She decides to remain silent. Unfortunately, things don’t exactly work out as she planned. You see, Kouno and Honami weren’t exactly alone when he made his confession to her. In the corner of the school room, dozing off in a corner, is a guy from a neighboring class. He overheard the whole thing!

Naturally, this guy, Yanagawa, is not gonna just sit still after overhearing such a scandalous bit of info. He immediately lets Honami know that he knows, and before you know it, he has essentially blackmailed Honami into being his girlfriend. She dates him, or he will tell everyone about her relationship with Kouno! Now Yanagawa is very cute, and we can see he genuinely is affected by Honami. His blushes are adorable. But his cheerful way of slinging his arm around her shoulders does NOT make Kouno happy. Yanagawa obviously likes Honami, but perhaps this isn’t the best way to go about making her your girlfriend! When Kouno hears that Honami is dating this guy, well, now he’s really jealous! What a horrible situation! What will Honami do? She can’t let anyone know about her non-but-potential relationship with Kouno. She also has to deal with Yanagawa’s antics. How will things work out? Will she go for Kouno, the teacher who has loved her for years, or the new suitor, Yanagawa?

Next is an adorable tale that involves a bit of time travel! The story begins in 2011, when a group of college girls arrive at their old junior high for a reunion. It has been a little over 4 years since they all last saw each other. The reason for this gathering at the junior high is to dig up a time capsule their class planted there back in 2007. They all placed letters to their future selves in that capsule, and now it’s time to read what their past selves had to say. The group is excited to be there, but ASHIYA Koharu, our heroine, notices that the person she wanted to see most is not there. Back in junior high, she’d had a huge crush on her classmate, KASHII Subaru. They were good friends, and he often flirted with her (among others). She hasn’t seen him since junior high because shortly after they planted the time capsule, they graduated, and Subaru went to high school far away in Tokyo. Subaru hadn’t told anyone about his plan to move to Tokyo, so when he suddenly disappeared, it hurt everyone, especially Koharu. Why didn’t he tell her he was leaving?

The group planted their time capsules under a large sakura tree in the school yard. Koharu is able to find her letter in the pile. Reading it under the tree, Koharu misses Subaru and wishes she could see him. Without warning, a wind kicks up, and Koharu passes out (or falls asleep). Whe she openes her eyes, she is shocked to see Subaru there. He came to the reunion after all?! But wait, why is he wearing that old school uniform? Is it cosplay? But wait, why is he calling her “nee-chan,” a term biys use to refer to older girls? She isn’t older… what’s going on? And why isn’t the sakura tree, which was in bloom just a few minutes ago, not in bloom anymore? Subaru doesn’t know what to make of this crazy girl he found asleep beneath the tree. He tells her that the trees haven’t bloomed yet, though they will soon, and he shows her the date on his cell phone. 2007? No, it can’t be! Koharu has slipped back in time to her junior high days?

Panicked, Koharu plays dumb, saying she can’t remember her name or why she’s there. Subaru, in a funny, outgoing way, decides to take her in and help her out. He decides to call her “Koharu” because she reminds him of this crazy girl in his class. (hah!) She has slipped back in time 4 years! What will Koharu do? What is Subaru finds out or recognizes her? What is she meets her old self? Maybe she can find out why he moved away so suddenly! How will she get home? Koharu’s adventures in the past are just beginning!

I really enjoyed both stories in this volume! I love time travel stories, so story 2 made me feel all warm and fuzzy. And of course I’m always a fan of my guilty-pleasure teacher-student stories.