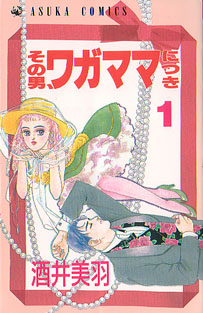 Miwa SAKAI is one of my favorite shoujo mangaka! I intend to make a separate site devoted to her and her works. I am slowly collecting all of her works. She has been drawing manga for over 20 years, and her art style has changed throughout the years. In the late 70’s it was a very retro style that you see in many mangaka at the time. (Sparkles in the eyes, defined upper lip, long noses, pointy faces, etc.) Over the years her style has become more refined and, in my opinion, unique. Her lines are thin, the style airy and feminine. Characters tend to look crosseyed a lot, but the effect is cute ^^ While the themes of her stories don’t usually seem all that original, the way she draws them and paces them really pleases me 😀 Occasionally she draws chins on guys a bit too long and rounded for my tastes, but she has been changing that in recent years, yay 😀

Ahh, this is my favorite series by Sakai-sensei! It’s just so fluffy! The story begins with a high school senior named Shiina sneaking into an ultra-hip club/restaurant on her 17th birthday with her friends. At the club they meet Makoto, the extremely sexy and suave owner of the club. He is hip, cool, wears dark shades, and is interested in the girls. However when Shiina lets it slip that it is her 17th birthday, he kicks them out, because his club is for 18 and up. He is still interested in her though, and asks for her info (home number, etc.) so he can look her up when she’s older. When she gives him her name, he gets a very strange expression on his face that Shiina doesn’t understand. Things are soon explained at school the next day when Shiina notices that the polka-dot band-aid that her geeky science teacher is wearing on his index finger matches exactly with the band-aid the nightclub owner was wearing.

Shiina realizes her teacher’s big secret. By day he is nerdy, flustered Uno-sensei, the science teacher. By night he is Makoto, the very very rich nightclub owner. Shiina knows his secret, and this brings them closer. Shiina develops a crush on Uno-sensei, and he tries to resist his interest in her. And so begins an unusual relationship between 17 year old Shiina and 25 year old Makoto. Not only is it a teacher-student relationship series, there is the fact that the teacher has a double-identity as a low-paid teacher and as a wealthy nightclub owner. And when he is in ‘Night Club Owner’ mode, he is often mistaken as a member of the Yakuza ^_^;; Lots of secrets to keep! This series spans 10 volumes as well as a brief 3-volume sequel. The sequel is caled “Sono Otoko Wagamama Nitsuki +Alpha” As far as I know, the original 10-volume series is currently out of print, and it can be difficult to find a complete set. I had to find mine at a used bookstore. However, Miwa SAKAI has been having a lot of her older series reprinted in the last couple of years, so hopefully this series will be reprinted too!