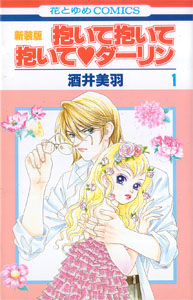 Once again, I return to one of my favorite authors, SAKAI Miwa. I eventually want to talk about all of her works here, even though most of them aren’t technically shoujo but instead fall into the josei category, meaning that they are for an older audience. Still, I love her works enough that I want to share the joy with others 🙂 As I always mention when I cover a SAKAI series here, I like this author because she seems to share a lot of the same shoujo manga fangirl fetishes that I do, namely a preference for student-teacher stories and large-age-gap relationships. The stories are often very funny, yet have sweet romance. I usually classify her series under the “smutty romance” category, mainly because the series do depict her characters having sex, but it is usually shown in a very romantic, feminine way, and isn’t really ‘raunchy’ so-to-speak. Collecting SAKAI manga is so difficult, because she has been producing series for so long, changing publishing companies, and re-releasing older series with new covers and titles. I have occasionally bought duplicates. In the case of this series, it ran in Silky magazine, and was originally published in thicker volumes under the HLC Silky label. Then, for a reason unknown to me, the series was pulled from that label after only a couple of volumes, and it was published again from the beginning, under the Hana to Yume label (same company, different label). Under Hana to Yume, the story continued past the point where the HLC Silky version stopped. Collecting her series is a challenge 🙂

This is yet another SAKAI Miwa age-gap series, and she even throws in a teacher for good measure. It all begins with an omiai, or a meeting where prospective partners in an arranged marriage go to meet each other and determine if they want to go ahead with the match. Our heroine is an 18 year-old girl named FUJITA Yuuka. Her family has arranged for her to go to an omiai, however, Yuuka is dead set against it. She protests the entire time, even after she is all dressed up in her formal kimono at the meeting place. She turns to run out of the hall, but instead stumbles and trips, landing on none other than KURUSU Ryou-san, the man she was scheduled to meet! Not a great way to start a relationship, and now Yuuka has no way of backing out of the meeting!

Yuuka’s first impression of Ryou is not that great. He is wearing a suit, but he looks a bit rumpled, and his tie is wrinkled. She suspects that he wasn’t thrilled to be there either. Ryou is an assistant professor in Biology at a university. He is *36* years old! Yuuka’s reaction to that is obvious — ‘No way, an old man!’ Her family doesn’t seem to mind, though, and happily leaves them alone to get to know each other better. However, instead of going to drink tea, as is normal for an omiai, he has other plans. There is a hot spring near by, and he wants to run some science tests on the waters. Yuuka can’t quite believe this, but as she has a stubborn streak, she decides to go with him, even while still in her fancy kimono.

It’s a lovely day, and Yuuka is surprised when she enjoys herself watching Ryou work. She even blushes when he speaks to her. Wait, she actually likes him? He is kind of nerdy, but in a competent way. He is the type who is hot when he takes off his glasses 🙂 He knows what he’s doing and is confident, not clumsy or clutzy. Yuuka is interested enough that she goes to his college to watch him teach a class. He is popular with his students! However, it’s a bit annoying when they mistake her for a middle school student. How rude! Yuuka develops a crush on Ryou, and wants to make him feel the same way. But how could he? She is just a child in his eyes, and he only attended the omiai because it was at the hot springs resort that he wanted to conduct experiments at.

How can Yuuka make Ryou get serious about her? Yuuka is cute and outgoing. She wants Ryou to like her. However, she has some issues of her own that she must face as well. In the past, she was troubled by a stalker, one of her former teachers. He attacked her, and forced himself on her. It was a horrifying and traumatic experience, and since then, she has a hard time trusting guys. Yet it is different with Ryou. She is starting to care about him, and must work to overcome her past. He is not totally against her, but he is very much aware of how much younger she is, and once he learns of her problems, he feels he can’t take advantage of her.

Can Yuuka and Ryou make their relationship work? Ryou is a serious academic type, and Yuuka, in spite of her dark past, is a young girl who is very feminine and bubbly. She doesn’t want to be useless to him, but sometimes it seems like she is clinging to him, and he is just putting up with her. How does a serious guy like Ryou really feel about her?